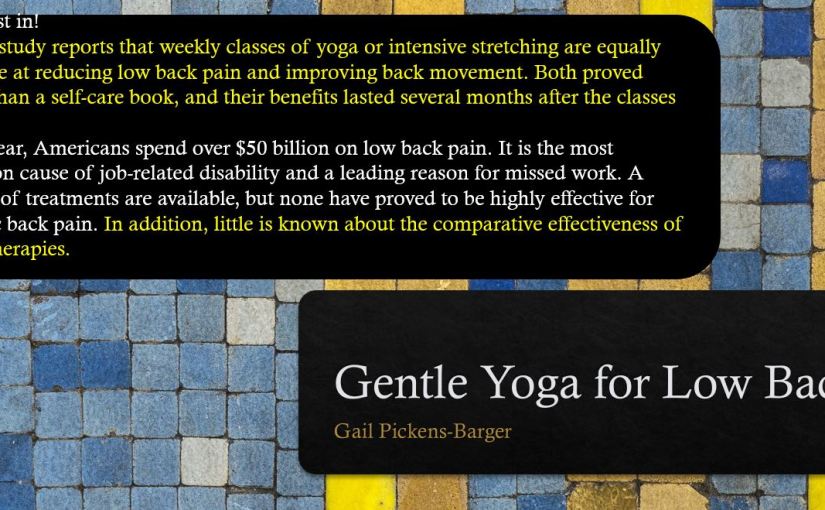 This just in.  Yoga effective in lessening chronic back pain.

This just in!
A new study reports that weekly classes of yoga or intensive stretching are equally effective at reducing low back pain and improving back movement. Both proved better than a self-care book, and their benefits lasted several months after the classes ended.

Each year, Americans spend over $50 billion on low back pain. It is the most common cause of job-related disability and a leading reason for missed work. A variety of treatments are available, but none have proved to be highly effective for chronic back pain. In addition, little is known about the comparative effectiveness of these therapies.

Researchers found that yoga was as effective as standard physical therapy for treating moderate to severe chronic low back pain in people in under served communities.

The results suggest yoga may be useful as a treatment option for people with chronic low back pain.

The participants were randomly divided into three treatment groups. One group received 12 weekly yoga classes designed specifically for people with chronic back pain; one received 15 physical therapy visits over 12 weeks; and one was given an educational book and newsletters about self-care for chronic low back pain.

The researchers found that all three groups reported improvement in physical function and pain reduction. However, people in the yoga and physical therapy treatment groups were significantly more likely than those in the education-only group to stop taking pain relievers after one year. These findings suggest that a structured yoga program may be a reasonable alternative to physical therapy for people with chronic low back pain.

“There are now a number of studies, including ours, that show that yoga is effective for chronic low back pain, but until ours those studies included mostly white and middle-class individuals,” Saper explains. “Chronic low back pain disproportionately impacts those who are economically disadvantaged. Therefore, we feel that it was important to test whether the yoga would be received well by an under served population as well as being effective.” —by Tianna Hicklin, Ph.D.

Contact Gail to see about your session of yoga to help you with your back challenges.